Invented in the 1970s, GoTREADS has a great product and a loyal following. But when the pandemic hit in 2020, they were forced to do something different. Their pivot to video ads and ecommerce made all the difference—and did it quicker than they ever expected.
The Challenge:
Deliver a Sprint campaign that would help GoTREADS take their business to the next level in the middle of a global pandemic.
The Outcome:
Sales increased by 4,300% in less than one year. Add to it some sweet video proof that the GoTREADS product can rescue ANY car from being stuck— even a firetruck! And when you think about it that way, GoTREADS saved 4,300% more lives, too. Sure, most of those lives were saved from inconvenience and the cost of a tow (not usually life-and-death situations). But still. Pretty awesome! 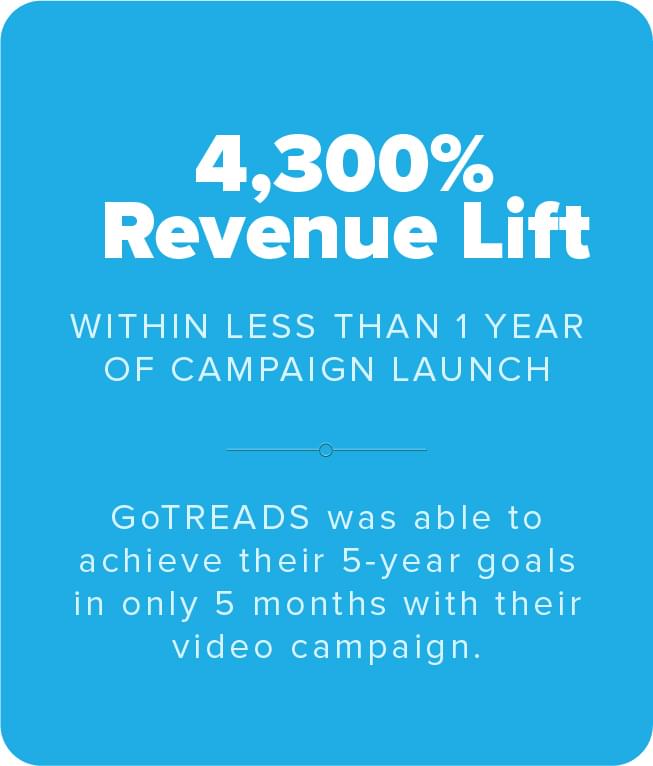 From a product he created for himself, Chris and Miriam Bair turned a keto-complete shake into a thriving business with over 30 employees—and they’re helping hundreds of thousands achieve their health goals along the way.
The Challenge:
Create a campaign that helps put a whole bunch of Keto Chow where it belongs… in the pantries of strangers! Oh—and also to reach $2M in revenue...no big deal (as you’ll see).
The Outcome:
Two funny and endearing Harmon Brothers “Hero Lite” video ads helped turn Keto Chow’s $321K investment into $14M in revenue. So either a crazy number of people are buying Keto Chow, or one guy is buying way too much.
Either way, Keto Chow for the win! 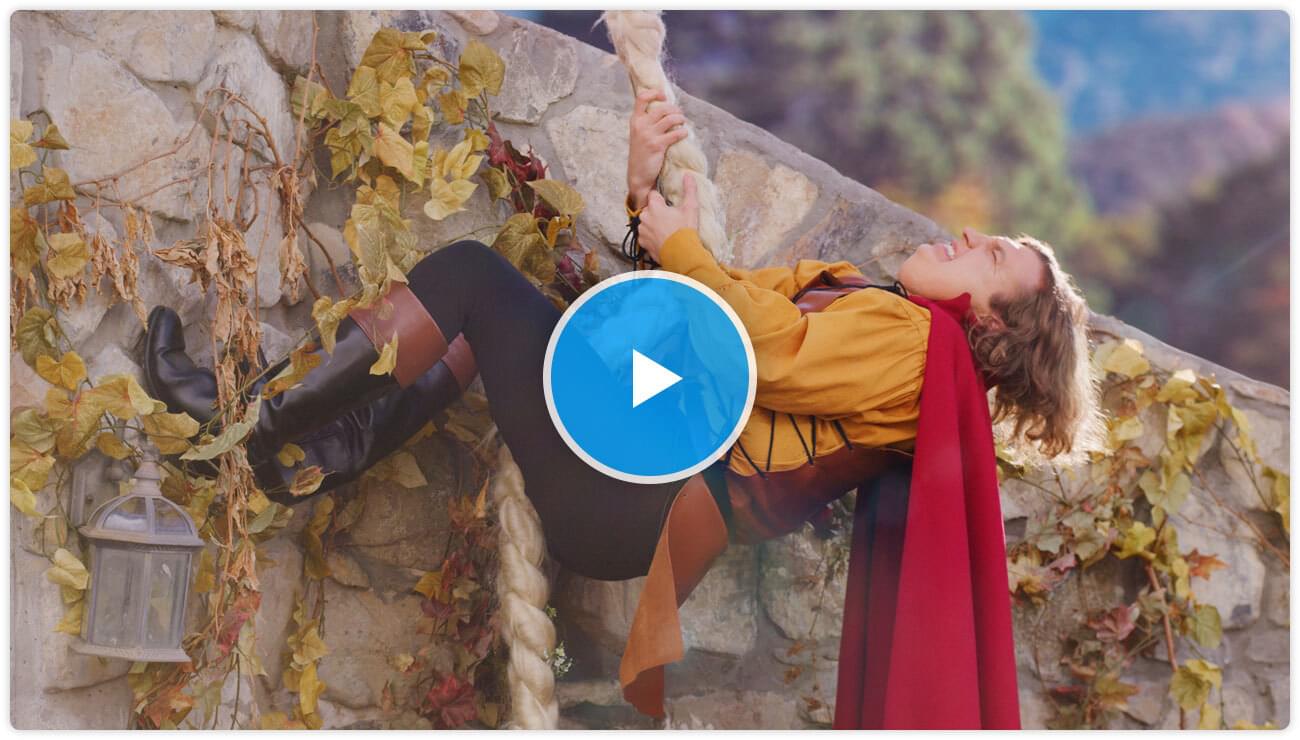 Years before Keto Chow came to life, Chris Blair found that the ketogenic diet dramatically helped his son who suffered from seizures. The catch? The diet was really unapproachable as a way of life for the rest of the family. This would mean spending a large portion of each day creating separate meals. It wasn’t sustainable for their busy family.
In 2015 and after years of trial and error, Chris developed a keto-friendly meal replacement that was simple to prepare, had all the nutrients that traditional keto misses—and it actually tasted good. Like really good. And he was using it himself to lose weight, so he knew it was effective. The product quickly gained fans and racked up thousands of five-star reviews on Amazon raving about the product (more than our moms ever have about us).
In the crisp fall of 2018, Keto Chow slid into our DM’s looking for some advertising that would expand their already- growing company. We were impressed by their product, but were also drawn to their story. Part of the reason Chris built Keto Chow was to make Keto more accessible for everyone who needs it. Ultimately After exploring the market, the product—and especially the people—we signed with Keto Chow because their product was already changing lives and we knew we’d be able to bring it to an even wider audience. That, and we were craving some more free samples.
The Campaign:
With the goal to represent the best keto meal replacement on the market, we created a hilariously quirky ad answering one question:
What would happen if the witch from Hansel and Gretel ate Keto Chow instead of kids?
It’s less graphic than it sounds. The client wasn’t the only one who loved it. In a single year Keto Chow went from $321K to $8.8M. After making what we can only describe as LITERALLY SO MUCH MONEY, Keto Chow came back for more (just like we did for their shakes).
In 2020 we collaborated with Keto Chow to create a second ad telling the classic fairy-tale of the prince who couldn’t lose weight until he used Keto Chow. Not familiar with that time-tested classic? Watch it here. In less than six months from the release of that campaign Keto Chow brought in $7.1M. That’s not just a lot of money, that’s a lot of people who finally found a diet that suits them.
Keto Chow is continually growing as the go-to replacement meal for keto-ites. They’re on track to do $15-16M for the year 2020.
Chris made a product that serves everyone, from people trying to lose weight, to people who need Keto for medical reasons, to anyone who wants an easy, healthy meal. We’ve been honored to show everyone that Keto Chow could make their life better, honored to work with fantastic entrepreneurs like Chris and his co-conspirator, Miriam—and hey, we really enjoyed our free samples.
“Three months after we launched the first ad, our revenue increased 121%. We thought we were prepared, but we were grossly unprepared for just how successful the ad would be.”
CHRIS BAIR
Co-Founder, Keto Chow 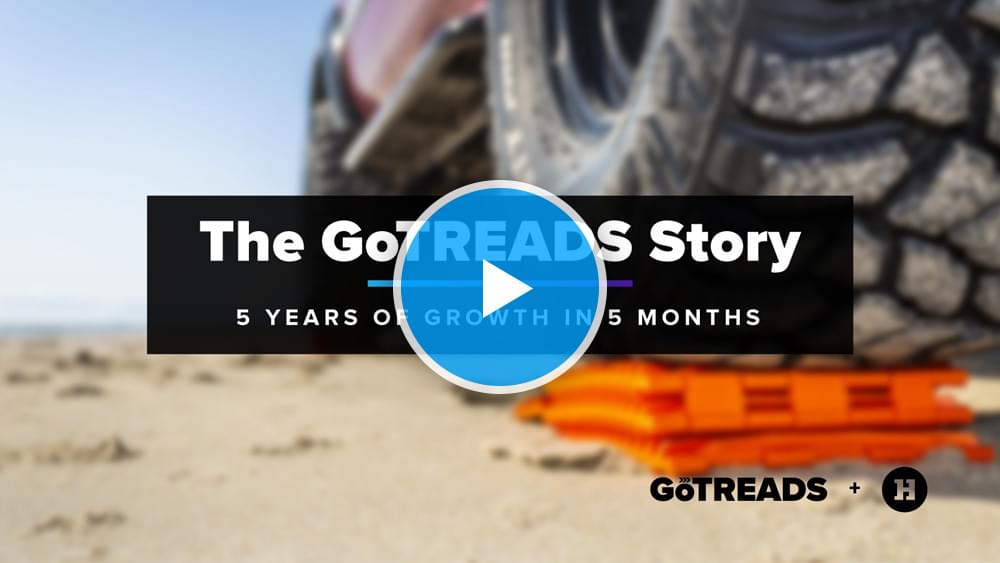 CLICK TO WATCH THE GOTREADS STORY
The Story:
GoTREADS has been selling their ingenious product that helps cars get unstuck from mud, snow, sand, and mud again for 29 years. The product is so reliable, they’re even used by the U.S. military.
The majority of their sales were in retail, and their main strategy for 2020 was to go all-in with trade shows, but those shows were cancelled due to a little bump in the road (some call it a “global pandemic,” sound familiar?) With the shutdowns, their original marketing plan was stuck in the mud.  GoTREADS had to completely rethink their marketing strategy—and it really got their wheels turning if ya know what we mean....(If you’re a dad, that joke was for you.)

Meanwhile, Harmon Brothers was hosting a Poop to Gold Giveaway Contest, offering the ultimate prize of a FREE Sprint campaign to the company—over $180K in value— to the winner. The goal was to give companies a leg up in the dumpster fire that was 2020. A lot of companies were suffering, and we wanted to help our community any way we could (and yeah, also generate some business, but hey, why not kill two birds with one stone?) GoTrREADS found the Poop to Gold Giveaway and threw their hat in the ring. Just entering the contest paid off before they even won the Grand Prize.
They used principles they learned from Easy Ads That Sell—a course from Harmon Brothers University—and their online sales began to grow. In fact, those same online sales from their Easy Ads That Sell, more-than-replaced their trade show revenue making 2020 their best year in their 29-year history. But that’s not even close to the best part, so don’t stop reading!
“It was gasoline on the fire. We've seen a lift across Amazon and through our dealer sales too. It has been incredible.”

AARON PINTO
VP & Creative Director, GoTREADS
The Campaign:
The grand finale of growth happened after they won the giveaway Grand Prize, a $100K Harmon Brothers Sprint campaign. The pandemic raged on, but so did GoTREADS' efforts. Once they launched the Sprint campaign, their sales responded immediately. The first ten days of January 2021 (one month after releasing the Sprint Campaign), they pulled in 20% of the revenue they’d made the entire previous year. It only got better from there—GoTREADS continued to break sales records each month.

Half of GoTREADS‘ 2020 sales came in December, the month the campaign launched. To lay it on thick: GoTREADS met their 5 year goal 5 months after releasing their Harmon Brothers Sprint campaign. And if that weren’t enough to make any company weak in the knees, less than one year after launching, GoTREADS grew 4,300%. Rub your eyes and read that again if you have to, because it’s real. GoTREADS could hardly believe it themselves.
Now, Harmon Brothers Sprint campaigns (the type we created for GoTREADS) are made with a lower budget than many of the ads Harmon Brothers has become well-known for (like Squatty Potty, Purple, Kodiak Cakes and more). Instead of focusing on world-building and comedy first, the focus is on sales with a less-fantastical spokesperson that still maintains an interesting, funny, and engaging edge.
But like many of our other Sprint clients, GoTREADS proves that you don’t need the biggest and most expensive ad to make a big difference in your revenue. A Sprint can transform your company. And they got one for free, those lucky ducks—talented, well-deserving ducks.
GoTREADS' product is reliable and versatile, so really, anyone with a car, good sense, and a healthy amount of anxiety would want to buy one. All we had to do was spread the word in an interesting and provocative way, so people would stick around long enough to discover GoTREADS.
To give the people what they want, you have to show them how to get it. And after seeing 4,300% growth in a year, we think it’s fair to say that the people want GoTREADS.
HARMON BROTHERS CONSULTING
What we focus on:
Market Positioning
Using video, photography and copy assets, we test, analyze, and then identify the optimal market positioning to get your brand on-track quickly and efficiently.

Channel Selection & Expansion
Taking a holistic view of market opportunities, we ramp up your brand’s presence and performance on existing channels, while exploring the product-market fit and benefits that new channels can provide.
Business / Marketing Architecture & Frameworks
By strengthening any weak links in your eCommerce architecture and establishing routines and frameworks for efficiency, your business can thrive as a whole. Our team directs email nurture series, mid-funnel nurturing, conversion optimization, ad buying, photography/video design, and more.
Trusted Confidant
As your partner, we help you stay the course, make the best decisions, and give you confidence & support as you go through the process (and the taxing emotions) of scaling your business.
Stop waiting.
Start scaling.

We audit, review, and advise on billions of dollars worth of eCommerce revenue. Each year alone, we review and audit 1,000+ companies ranging from startups to those doing more than $350M per year.
When you’re ready to scale your brand, we’re ready to help.
Let’s Get Started!